​Maple syrup is high in manganese and zinc, with 100 grams of syrup offering 22 percent and 3.7 percent of the recommended daily values, respectively. Manganese is an important cofactor for several enzymes that are needed for energy production and antioxidant defenses. Zinc is essential for optimal immune system function. Deficiencies of these minerals may lower white blood cell counts and subsequently reduce immune system responses. Maple syrup also contains potassium and magnesium.
In comparison with honey, another common sweetener, maple syrup is lower in sodium, making it suitable for low-sodium diets. The syrup also has 15 times more calcium than honey, while containing 45 fewer calories.

​In addition to its mineral content, pure maple syrup is a source of several vitamins. Vitamins are organic nutrients essential for cell functioning. The most notable vitamins in maple syrup include niacin, B5, B2, folic acid, B6, biotin and vitamin A. Niacin and both of the B vitamins assist in the energy metabolism of body cells. B5 is a component of a significant enzyme that enables the release of energy from the energy nutrients. Vitamin B6 is important in protein and amino acid metabolism and enables conversion of one type of amino acid to another kind that is needed in higher amounts. Vitamin A is significant for vision and for maintaining the skin and the linings of the body, such as the stomach lining.

Pure maple syrup is a natural, organic food with no reduction, processing or removal of any of its components. Other pancake syrups found in grocery stores commonly contain the ingredients high fructose corn syrup, cellulose gum, benzoate, sorbic acid and sodium hexametaphosphate. Raw food enthusiasts often include maple syrup in their diet as a natural source of sugar. It is also common in recipes for allergy-free foods.

Researchers from the University of Rhode Island have found more than 20 compounds in maple syrup that are associated with human health. Many of these antioxidant compounds are also believed to have anti-cancer, anti-diabetic, and antibacterial properties. These researchers have also recently discovered that maple syrup is a source of phenolics, a class of antioxidants that are found in berries. Navindra Seeram, a researcher at the university who specializes in medicinal plants, speculates that "the sugar maple [tree] is wounded when it is tapped for its sap, and that it secretes phenolics as a defense mechanism."
Antioxidants have been shown to help prevent cancer, support the immune system, lower blood pressure, and slow the effects of aging. Maple syrup is more nutritious than all other common sweeteners, contains one of the lowest calorie levels, and has been shown to have healthy glycemic qualities.
Maple syrup was the original North American natural sweetener. Native Peoples in North America were the first to recognize 100% pure maple syrup as a source of nutrition and energy. Since then, researchers have been documenting that maple syrup has a higher nutritional value than all other common sweeteners. 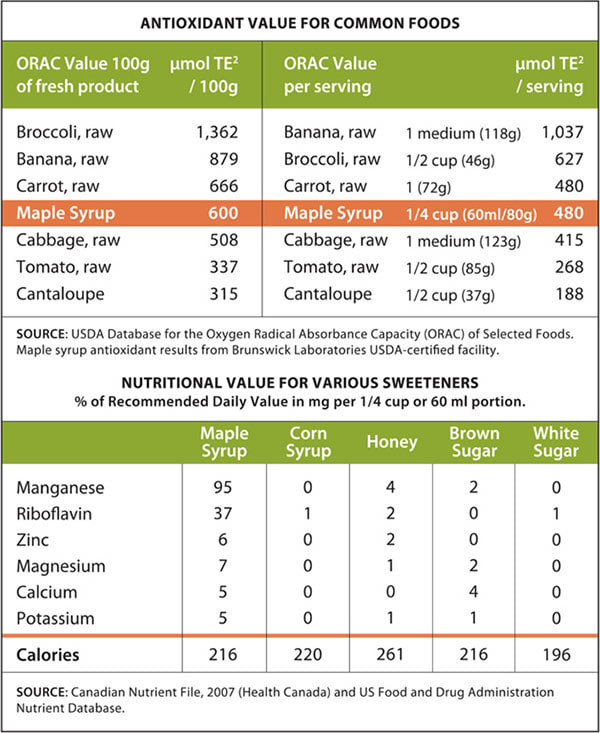